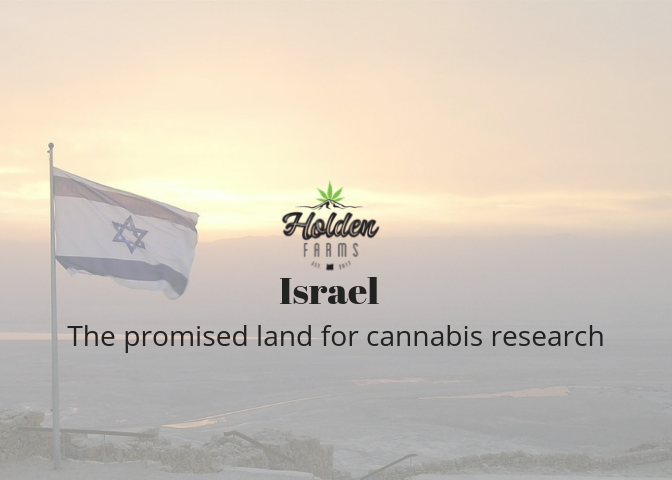 A New Testament For Medical Marijuana A country that is steeped in history is leading the way in cannabis research.  Maybe it’s not that surprising since hemp and cannabis have a 10,000-year history as a crop that was grown the world over for both industrial and medicinal purposes up until about 81 years ago.  Now in the 21stcentury the holy land of Israel is pioneering research on medicinal uses of cannabis and leading the way is Hebrew University’s Father of Medical Marijuana Research, Raphael Mechoulam.

Mechoulam research broke down the plant itself to identify different parts of its structure, which led to identifying the non-psychoactive part of the cannabis plant known as cannabidiol or CBD for short. He also identified the Endocannabinoid system the largest receptors in the human body. His research discovered that the human brain produces its own cannabinoid compounds that stimulate the body’s receptor system, which is important in regulating everything from mood, pain, memory and more.

Mechoulam began his research in the 1960’s and procured his cannabis from none other than the police department their stash that was taken as evidence for arrests.  He had to obtain a special permit from the government.  Marijuana for recreational use is still illegal in Israel although somewhat decriminalized as citizens caught with it with no previous record are simply fined. The medical research in Israel has helped to cultivate different strands of CBD and THC plants so the varying levels and strains can be administered according to the medical condition and for optimum efficacy.  Medical research on cannabis not only identifies what uses and treatment cannabis is suitable for, but also what dosage should be used and means of ingestion.  For example; smoking marijuana doesn’t give an even and predictable dose and goes quickly to the brain whereas orally in edibles or oil, cannabis passes through the liver and is slower to be absorbed. Cannabis contains 142 known cannabinoids the active component.  Designing the right combination of these active components and even the extraction method are all factors in developing efficacy. The US does not allow clinical trials with humans as the entire cannabis plant is categorized as a Schedule I drug.  The US is not alone in it’s strict research policies and restrictions on growing cannabis, it’s recreational use and medical use; most of the world in fact have similar laws.  There are only 35 countries that allow for medical marijuana use and many of these countries still have limited cultivation laws. Only 7 countries can cultivate cannabis in large quantities and only Uruguay has the complete freedom for cannabis recreationally, medically and for cultivation

Even in Israel, cultivation of cannabis is for medical providers only.  But the key is that research being allowed in the country, which will position Israel as the world leader in medical research for cannabis.

There are currently 110 clinical trials being conducted in Israel using cannabis.  Many companies around the world are outsourcing their research to Israel with companies setting up shop with boots on the ground in Israel. Even Rabbis in Israel are de-stigmatizing the use of marijuana the only thing not kosher is consuming seeds over Passover since it is considered a legume.

Israeli pharmacies are now selling cannabis oil under a pilot program that has been approved. It is estimated that 147 million people use medical marijuana for treating symptoms of  AIDS, MS, crohn’s disease, epilepsy, cancer treatment side effects and multiple sclerosis. And the numbers are growing due to awareness and education changing the stigma behind marijuana.  But by no means is medical cannabis part of a physician’s standard practice and it all stems from lack of clinical trials.  Israel will now be changing that thanks to the Father of Marijuana research Raphael Mechoulam.

Listen to Holden Farms podcast The Real Dope with Dr. Kellie Raydon’s as she explains the endocannabinoid system on www.holdenfarmscbd.com– News and Science.