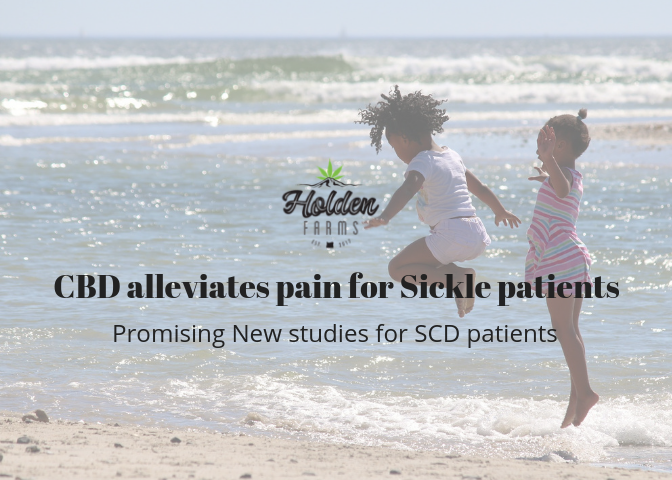 Sickle Cell Disease (SCD) is a terribly painful and often deadly blood disorder effecting millions of Americans. New studies show that CBD can help.  Children and adults with SCD suffer from chronic inflammation and pain and have episodes known as pain crisis which can be brought on by cold, stress, illness or dehydration often requiring hospitalization. This National Institute of Health study offers convincing evidence that cannabis in general, and CBD in particular, could have dramatic results in helping treat the symptoms of Sickle Cell Disease (SCD).

The study found that test mice infected with SCD had greater reductions of inflammation in joints and soft tissue, as well as greater pain relief, when given CBD compared to mice given steroids and opioids, the traditional treatments. Additionally the mice given CBD didn’t suffer from the multiple side effects that come with both steroids and opioids.

The study also found that relief from symptoms was up to 20% longer with CBD.  Additionally, while the long-term use of opiates and steroids can do damage to cell membranes, CBD seems to encourage cellular regeneration.

The study’s conclusion suggests that the SCD research community should begin immediate large-scale human studies. CBD is a natural product with few if any side effects and should be available to patients.

What is Sickle Cell Disease?

SCD is a group of blood disorders that can occur when the SCD gene is carried by both parents. More than 4 million people in the US are affected. People of African and Hispanic background are the majority of patients.

Symptoms usually begin when SCD patients are children, 3-4 years old. People with SCD deal with painful swelling of hands and feet, yellow eyes, stunted growth, frequent pain episodes and sometimes even stroke. SCD can also make a patient susceptible to sudden death when, for example, severally dehydrated or during intense physical activity. Many people with SCD spend their lives in and out of hospitals and life expectancy is about 40.

CBD VS OPIOIDS AND STEROIDS

While there is no cure, there have been many advances to help control symptoms and extend life expectancy. Hydroxyurea treatments, (introduction of fetal hemoglobin), was a break through treatment helping to nearly double life expectancy. The addition of powerful pain medications like opiates and anti-inflammatory like steroids, patients have found some relief, but at a cost: the well-publicized side effects. Meaning, as the NIH study shows, CBD could bring similar relief to patients without those side-effects. The most common SCD is Sickle Cell Anemia, (SCA), which results in the oxygen-carrying hemoglobin to be abnormally shaped. Normal red blood cell are round and pliable. A sickle cell is hard and shaped more like, well, a sickle. Because of it’s shape and consistency a sickle cell is less effective at carrying and transferring oxygen to the body. Over time the lack of O2 causes deterioration of vital organs.

SCD and the Politics of Race Like with cannabis and CBD, SCD has a long history of being racially politicized. 1 in 12 African Americans and 1 in 100 Hispanic Americans are effected by the disorder.

Western medicine credits Dr. R. Lebby in 1846 with identifying the blood abnormality, publishing his findings in the Southern Journal of Medical Pharmacology. But it was Dr. James Herrick and his then intern Ernest Irons whose 1910 study first put the cells literally under the microscope, discovering the physical properties of the effected cells that gave the disease it’s name. Studies in 1915 at Washington University Medical School established the connection between family members, making SCD one of the first conditions  recognized as being “genetic”.

It only took 89 years for parity

Since SCD primarily effects African Americans and Hispanics it was low on the priority list for funds being dolled out by NIH and other government scientific agencies.

In fact it wasn’t until 1972, under President Nixon, that the Sickle Cell Anemia Control Act brought serious, concentrated funding to fight the condition It wasn’t until 1987 that infant screenings for SCD were included in standard protocols in most states. Meaning until then children were not receiving treatments as early as they should have been.

Finally, not until 2004 did Congress decide, when updating the 1972 act, to create parity in funding for SCD with other genetic blood conditions.

One can guess that had this disease affected a different, (i.e. white), population it would have taken less then 90 years for the government and medical community at large to put real resources behind helping patients who needed it.

We at Holden Farms hope it doesn’t take that long to get CBD to patients who need it now.