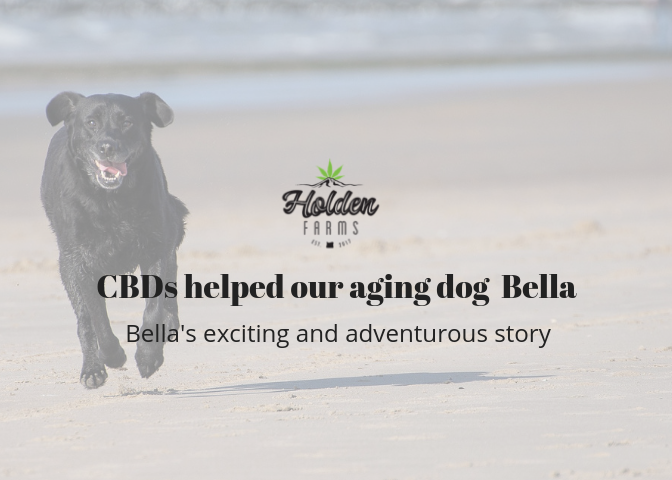 We believe our dog Bella is about 13 years old.  And like most senior dogs, one day she is the terror of the neighborhood, and the next she can’t get up on the couch. She is a pitbull/lab mix and has had quite the adventurous life with us. She has always had boundless energy and vitality and it’s heart breaking to see her age. Every day she seemed more and more sluggish. My wife and I were preparing for the passing of another animal. That’s before we found out about how hemp CBD can help.

I told our friend, Holden Farms Science Officer Chris Harrison, of Bella’s ailments and he recommend a Hemp CBD tincture he thought it would help. I was skeptical. I had heard that dogs hate pot and that it can be bad for them.

Hemp CBD helps our dog Bella without any “high”

Chris, a biologist and cannabis-terpene expert, told me that animals can’t handle THC, too much for their frontal lobes. But CBD, the non-psychoactive component of cannabis, is different: It can help with inflammation, improve energy and ease anxiety. He said that in the wild animals search out cannabis when they are ill. They eat the cannabis feeder leaves for the CBD but avoid the flower, which hold most of the THC.

So we tried the Hemp CBD tincture, a 300mg tincture from Spirit Animal, with an open mind,  but before I tell you the results, let me back up a bit and tell you how Bella came to live with our family 11 plus years ago…

How the adventure with Bella began…

I first met our dog Bella while producing a film, “Down for Life” ,in south Los Angeles. We had been shooting at a swap meet in what can only be described as a rough neighborhood. She was a stray who kept hanging around. Movie sets generate a lot of left over food, so the first sign she was a smart dog.

The folks working on the crew kept trying to get her to come to them at lunch, trying to lure her. And while she would come up enough to get some food from them, she would then skittishly dart away. Also, she was injured with some kind of puncture wound on her side. With all that though, she seemed sweet. While I was insanely busy trying to keep a movie on track, I found myself concerned for this dog. I asked the manager of the swap meet about her. He told me she had been hanging around for a couple of weeks begging food off people but was never “aggressive”.

On our last day of shooting the guys in the grip department decided, for the dogs safety, they needed to call animal control. However the grips were from “different” neighborhoods in LA, (i.e. richer neighborhoods). In this neighborhood, at that time, the policy of animal control, which I was privy to, was “mandatory kill”. Meaning this dog would not survive 48 hours in the pound before being destroyed.

With this knowledge, I felt bad and decided to throw a hail-mary. I told my grips that I would open my car door, call the dog and if she came great. If not, her fate was sealed with animal control. (To be honest I thought this was an open gesture. I had tried to get the dog to come to me several times over the days we shot there to no avail. Easy chance for me to look like a great guy with no consequence.)

So, I opened the door to my car, looked at the dog and said, “Get in”. To my complete surprise, she took one look at me, bound over and jumped in. I even left the door open for a minute to allow her to jump back out. She did not. She sat there, panting, not moving. I had a dog.

Congratulations! We now have a “puppy” My family had been in Oregon for several months where my wife was performing in the play                 “My Matise” at the CoHo Theatre in Portland. My daughter had recently had a birthday, her 9th, and she had been asking for a puppy. So on the way home I called them and told them, “Guess what? We have a “puppy!” My daughter was so excited she decided her name was Bella Vida, Bella for short.  Of course, Bella was not really a “puppy”. She was a 70lb dog already.  She was sweet, but full of energy. At about 18 months old, she had been living on the streets for who knows how long so discipline was not a strong suit.

The 70lb “puppy” terrorizes with love

The next two years was filled with the family “fun” with Bella: trying to “play” with my daughter and son, scarring them so badly at times they hid inside the Jacuzzi with the cover on; or her destroying a chaise lounge, literally chewing it to pieces; her getting out of the house and running, full speed around the block, which can be intimidating for a neighbor taking their child for a walk and a 70lb pit-bull mix comes running at you full speed. But, through trial and tribulation, Bella became a part of the family, dysfunction and all. And since then she slept nightly on my kids’ beds, was all of our friend when we were sad and all she asked was the love that we all had no choice but to give. And then she got old

So after Chris’s recommendation of the hemp CBD tincture for Bella I figured, what the hell.

He sent me down some Spirit Animal 300mg  tincture. I gave her some and I shit you not, 10 minutes after giving her a dose, she went from months of not walking any more than from bed to her food and back, start chasing our 13 month puppy around the house.  Over the next few months her energy was hugely up, a fatty tumor she had forming on her side completely disappeared and her appetite returned with a vengeance. She is a completely different and happier dog.

Now I can’t say for certain had we not given her the Spirit Animal CBD she would have died as we thought or that she will live longer because we did. But I can say for certain that she is living better, happier and healthier by a long shot than she did before. And for that my whole Holden family will forever be grateful.