How Does CBD Work To Heal Your Body? 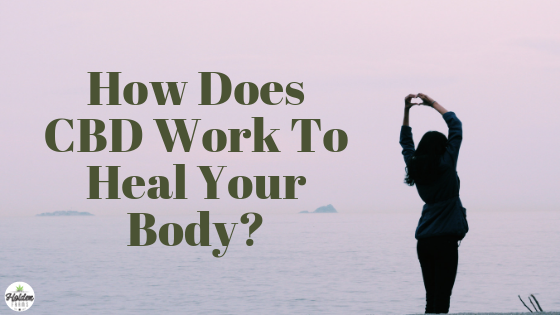 Have you heard that CBD can help with… everything?

But how can one single compound be so helpful for so many things? It must be nonsense, right? There’s no “magic pill” so why would there be a magic compound?

First, let’s chat about what CBD actually is.

CBD, or cannabidiol, is a main ingredient in cannabis plants, most often derived from hemp.

(We’ll talk about the difference between hemp and marijuana in a minute.)

Wait wait… a phytocannabinoid? What does that mean?

Glad you asked! There are two types of cannabinoids. The internal kind your body creates (called Endogenous Cannabinoids) and the external kind that supplement the system (called phytocannabinoids).

Think of it like Vitamin D. Your body can convert sunlight into small amounts of vitamin D, but if you don’t live in a place where you see the sun very much (I’m looking at you PNW), you may want to supplement your vitamin D intake.

CBD is the insulin of the endocannabinoid system. It’s a boost to an amazing regulatory system.

What is the Endocannabinoid System?

Here’s a great recap from The Fresh Toast:

“The system’s main function within the body is to help maintain a healthy internal balance – what many scientists refer to as “homeostasis.” It does this by using receptors to interact with various internal and external compounds to regulate our various systems and boost our overall health.”

So the system is built to regulate various moving parts in our bodies.

What moving parts? A study done by Shenglong Zou and Ujendra Kumar, published in 2018, shared these findings:

So why is CBD so taboo?

In short? Because of historical misconceptions. And fear.

Oh, and because it’s a supplement and not a medication, it’s not regulated by the FDA.

There’s a lot of misconceptions about CBD. You may hear CBD and marijuana in the same sentence and think I don’t do drugs. Don’t even talk to me about this CBD crap.

Here’s the thing, though…

CBD is not the same thing as THC.

Hemp vs Marijuana? Tell me more!

Here’s a great image from CBD Origin that explains this visually:

If you’d like to learn more about the differences and similarities between hemp and marijuana, visit their site here.

CBD is a phytocannabinoid that doesn’t get you high.