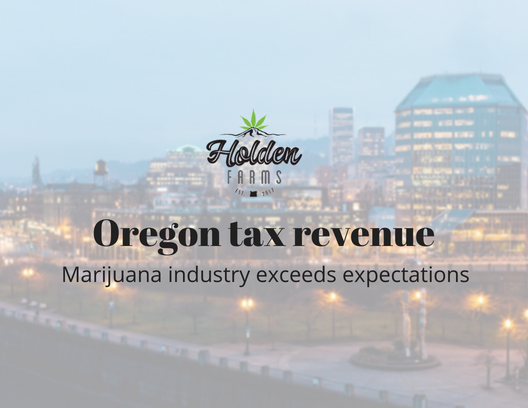 Oregon marijuana industry doles out over $100M in taxes first year of legalization.

Oregon collected a total of $108.6 million in state and local taxes between Jan. 4, 2016, and Aug. 31, 2017 according Noelle Crombie of The Oregonian news. After costs covering the programs start up and regulating costs, over $85M was distributed to schools, public health and local government as prescribed by the state’s law.

The tax revenue generated exceeded supporters of the new laws projections.“I am glad to hear that the revenue is finally being distributed,” Anthony Johnson, the chief petitioner of Measure 91, which legalized recreational cannabis sales in Oregon, said. “This is what the voters intended. It shows that legalizing and regulating cannabis can help generate revenue for important governmental services.”  And that is awesome.

The recent action by the state legislature to direct funds to the $8.2B State School fund, for example, helps local administrators and districts direct the new money where it is needed locally.

As Morgan Allen, deputy director of the Confederation of Oregon School Administrators, said ““That money is much more effectively impacting schools and students in a positive way by going into the state school fund,”

Much needed tax revenue has helped a variety of education and public health programs in all the states that have legalized, besides Oregon, Colorado, Washington State, Hawaii, Nevada and California.

Marijuana not a demon, but a fiscal hero At the same time none the horror show consequences that folks who have objected to legalization, (not to name names but, you know, like Attorney General Jeff Sessions), claimed would have happen happened.     However, Holden Farms feels it is important to remember that cannabis, (THC, CBD, CBG etc) is not a cure all, whether you are talking about health or finance.

To put it into perspective, Oregon spends roughly $30M per day to run it’s K-12 schools. So while $85M is great, it at most covers a few days. And while the tax revenue is rising it is still dwarfed by local liquor sales.

As Scott Winkels, a lobbyist for the League of Oregon Cities, said ““It’s helpful, don’t get me wrong,” he said. “But we aren’t going to smoke our way to fiscal bliss.”